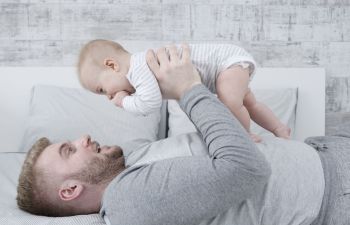 We are all allowed to change our minds. Some men, wanting permanent sterilization and undergoing vasectomy, ultimately want the procedure reversed. Undergoing surgical reversal can be a reasonable approach for the right candidate, according to fertility specialist Daniel Kort, MD, Associate Medical Director of Neway Fertility.

In simple terms, a vasectomy reversal reconnects each end of the vas deferens, the tube that carries sperm from a testicle into the penis. If the procedure is successful, sperm are again present in the man’s semen and pregnancies can be achieved naturally.

Only a small percentage of men who undergo vasectomies later change their mind, Dr. Kort says, but their reasons can vary widely. “Some men simply want a larger family than they previously thought,” he explains. “Others have lost a child and sense a huge void, while still others remarry or pair up anew and want to create a new family. Others had a vasectomy without having children and their life circumstances change.”

How A Vasectomy Is Reversed

While the procedure may be scary to many men, the operation itself is fairly straightforward and involves a surprisingly small amount of pain, Dr. Kort says.

Generally performed at a surgery center or hospital, men are given sedation or general anesthesia, so no pain is felt. The surgeon makes a small cut on the underside of the scrotum, exposing the vas deferens tube and releasing it from surrounding tissues. Then, the vas deferens is cut open to examine the fluid within for sperm. When sperm are present, the ends of the tube are reconnected to ensure the effective passage of sperm. Typically some sperm is also taken and frozen for future use with IVF, should the procedure be ultimately unsuccessful.

While there are no guarantees, men who have this procedure often go on to achieve pregnancies and father children. Success rates generally vary from 40% to more than 90%, depending on a host of factors, including the time interval from original vasectomy, success of operation, and the status of the female partner.

Like any surgical procedure, reversing a vasectomy comes with potential complications. These include bleeding within the scrotum, surgical site infection, or chronic pain. “Fortunately, complications are rare,” Dr. Kort notes, “The most important thing to assess when deciding what to do is the estimated pregnancy rate following the procedure.”

“Success rates vary by surgeon, so it’s smart to seek a vasectomy reversal from a surgeon trained in microsurgical techniques,” he adds. “Make sure to ask how many vasectomy reversals the doctor has performed, the type of techniques he or she uses, and how often their patients have then gone on to father another child.” Equally important, make sure to consult with a reproductive endocrinologist as a couple to make a long term plan before and after the surgery.

Daniel Kort, MD, is a double board-certified obstetrician/gynecologist and reproductive endocrinologist and is associate medical director of Neway Fertility in New York City.