A new way to think about polycystic ovary syndrome (PCOS) 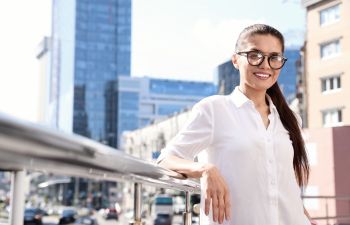 PCOS is likely the most common endocrine disorder found in reproductive age women affecting as many as 15%. Common symptoms include irregular menstrual cycles, hirsutism (excess hair growth), and infertility.

However, not all women with PCOS fit this classical PCOS phenotype, in fact, a significant number have a normal body weight (lean PCOS), these women are often overlooked by medical specialists because of their subtler presentation.

PCOS is characterized by three main features: hyperandrogenism, ovulatory dysfunction and polycystic ovarian morphology. Only two out of three features are required for a diagnosis of PCOS, thus there are at least four PCOS phenotypes (see figure). It is also important to keep in mind that several relatively rare but serious disorders can mimic PCOS, it is important that a doctor rule these out before a final diagnosis of PCOS is made. 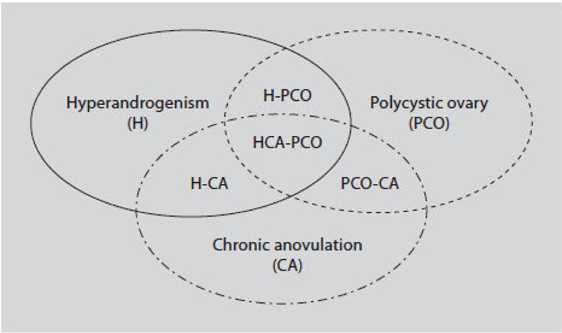 Treatment of PCOS has to be individualized based on the symptoms and needs of the patient. As shown in the figure different PCOS phenotypes have different manifestations necessitating adjustment of approach to each patient.

For infertile young women with an obese/classical PCOS phenotype, mild weight loss can help improve ovulation frequency. While there is no one diet that is universally advised for PCOS, a low-glycemic (low-GI) diet is a popular choice. Women who have insulin resistance and/or diabetes may also benefit from insulin sensitizing drugs like metformin. There is recent evidence that when continued during pregnancy metformin can lower the risk of late miscarriage and preterm birth.

Ovulation in PCOS patients can generally be restored with oral drugs like clomiphene (Clomid) and letrazole (Femara). For patients who do not ovulate on these drugs injectable gonadotropins are used. Ovulation induction is often pared with intrauterine insemination (IUI) where the sperm for the partner or donor is placed into the womb at time of ovulation. Pregnancy chances in such cycles in women below age 40 range from 5-20% per attempt depending on several factors. Whenever fertility enhancing medications are used there is an increased probability of twin pregnancy.

In some cases it may be beneficial to lower androgen levels prior to starting fertility treatments, this can be done with various drugs, the most common are steroids like dexamethasone and/or a short course of birth control pills. For women who are not pursuing pregnancy other anti-androgen drugs may also be useful.

There are several approaches to IVF in patients with PCOS. In conventional stimulation IVF cycles patients with PCOS generally produce large numbers of eggs & embryos. While this can be helpful in selecting the most viable embryo, it comes with an increased risk of ovarian hyperstimulation syndrome (OHSS). It is often recommended for patients who produce large number of embryos during IVF freezing them and implant in a subsequent cycle once the hormone levels have come down and the risk of OHSS has abated. Women over age 38 who are going through IVF where they produce a large number of embryos may also consider Preimplantation Genetic Testing for Aneuploidy (PGT-A), which allows preferential transfer of genetically euploid embryos and may decrease risk of miscarriage. Live birth rates in young women with PCOS are typically in the 40-65% range per IVF cycle, and many patients produce enough embryos for two pregnancies.

For some women with PCOS, mild stimulation IVF protocols may be preferable, these offer somewhat lower but still excellent live birth rates with at a lower cost and with less risk of OHSS by utilizing lower medication doses.